How UI trends reach for inspiration into the real world and what problems do we have to solve to make those trends work. 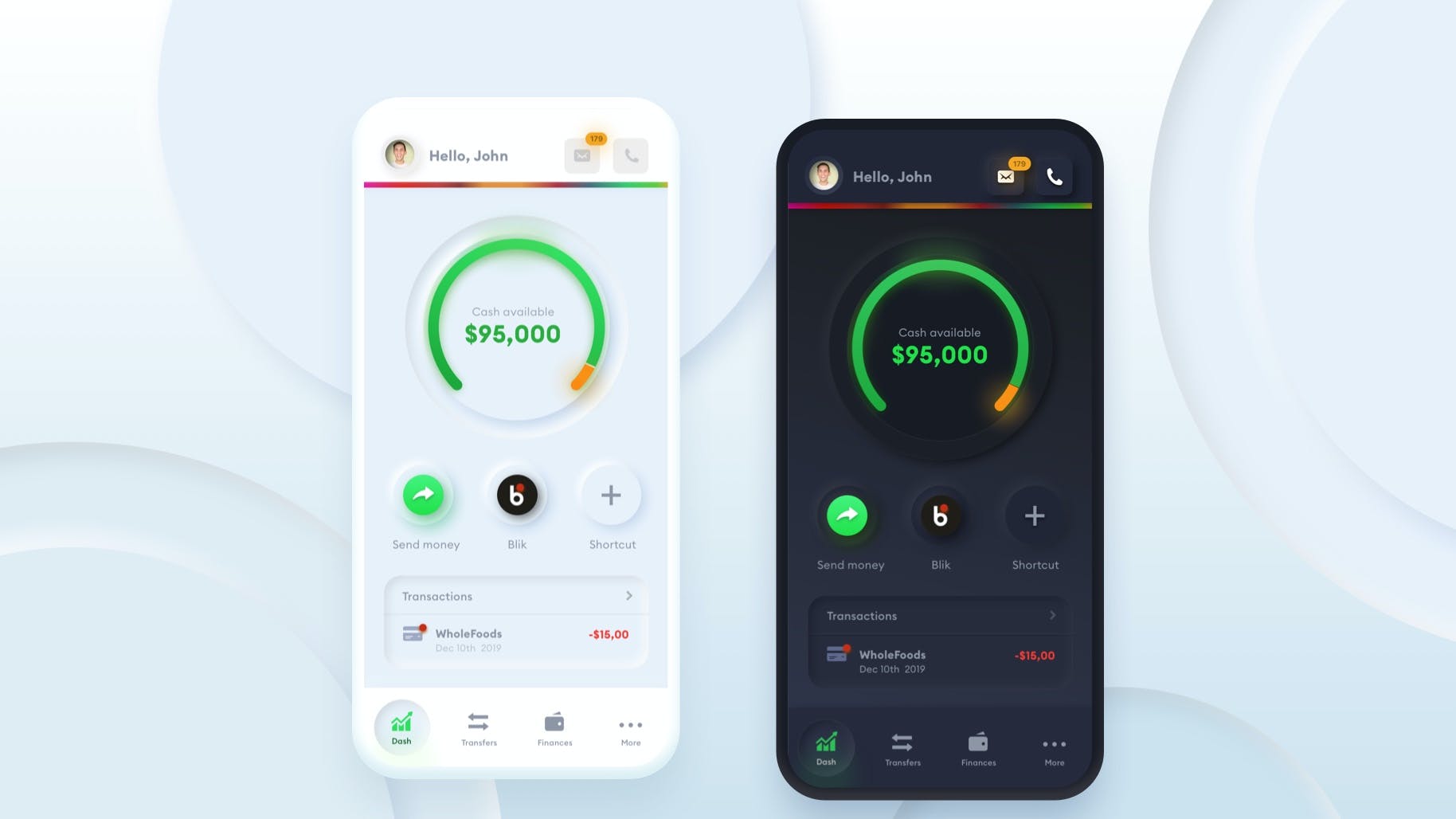 Last week we explored some potential new trends in UI design, with one particular trend gaining a lot of attention on both Dribbble and Instagram lately. This “New skeuomorphism” has been called by Jason Kelley Neuomorphism in the comments. I decided to skip the “o” and the name Neuomorphism came alive.

While various forms of Skeuomorphism still exist in UI’s (your desktop OS trash bin for example) the trend towards a particular part of this style is more apparent.

As Kamil  Falana pointed out the switch from lifeless “representations” to something mid-way to realism started happening.

We also noticed a while back, that this change started happening all around us — Apple being a good example. The push towards “super flat and minimal” got a pushback and ended up with a bit more of that textureless 3d feel. People seem to like it.

Halfway back, but better?

The entire hype started with one Dribbble shot that quickly went viral.

This shot by Dribbble user alexplyuto gained over 3000 likes and pushed the trend forward. After that it exploded in popularity and similar concepts started to emerge. We also made a couple of them at hype4.

This shot started a trend and while parts of it don’t make a whole lot of sense (a slide-to-go back arrow?) it was precisely what we needed to get excited with UI’s again. Thanks Alex!

Since the buttons didn’t change as much, let’s focus on the actual cards concept that makes this such a nice visual style.

A Modern / Material (upgraded) card usually is a surface floating on top of our perceived background and casting a shadow onto it. The shadow both gives it depth and also in many cases defines the shape itself — as it’s quite often borderless.

This effect is pretty easy to achieve by playing with two shadows, one at negative values while the other at positive. But for it to work our background cannot be fully black or fully white. It needs at least a tiny bit of tint so both dark and “light” shadows will be visible. You can use any hue for the background so it can be warmer or colder depending on your choice. But white and dark shadows have to be visible on it, if slightly.

Here’s the recipe — tweak it to your liking:

The pros and cons

The main benefit of this style is the “freshness” (at least for as long as it lasts). It brings that “new feel” to the interface and make it stand out. It can also be mixed with other styles, so it’s not overwhelmingly “soft extruded plastic” everywhere.

There are however some problems with it that need addressing. Two main problems we found so far (but we’re still looking) are:

The main problem with figure to background contrast ratio is that when they’re both the same color there’s no contrast to measure ;-) Objectively there’s a shadow so we could approximate and try to measure the first pixel outside of it. In the case of our example above we end up with these contrast values.

As you can see both the modern and neuomorphic cards are pretty low on contrast. Of course that’s partially their appeal and the cards themselves are not used for active elements — so as long as we keep the buttons prominent and with high enough contrast we should be fine.

The difference between those is marginal and if we wanted to use a much better contrast for the cards we’d have to do them this way:

And since almost nobody does the shadows that strong it means the rest of the UI elements have to be accessible. This assumption leads to a conclusion that those cards / extruded plastic cards are not really that important if we do the right hierarchy through typography, proximity and contrast with the important elements.

This has yet to be tested (and I will try to find the time to do it) but for now we’re assuming that both “versions” of the element below are “OK”. Even if some people don’t see the soft shadows on it, there’s still enough contrast for them to see the icon and “use it”.

While a “button” should look like a button, if the icon itself is contrasted well enough with the background it will still work. So the main thing to remember here is that if you’re going with this style keep all the important elements on it with high enough contrast.

After all most of the “modern” card views also don’t pass the contrast test with their shadows anyway.

The main problem with accessibility appears however if we decide to use our components as buttons and not cards.

We can easily create a pressed state with inverted-inner shadows like in the example below.

The problem here is actually big.

This pressed state has too little contrast to signify a difference. When it was OK for cards to “disappear” if the rest of the interface delivers, active elements need to communicate their state at all times.

There are a couple of ideas here like using an outline and filled icon, an underline or even filling the pressed state with a color.

Keep that in mind when designing. We all love the “pretty” but we also need to remember for it to be usable by everyone.

Let’s treat coding as a bonus round here, as it’s actually easier than we think to achieve that “soft plastic” look in CSS. We have yet to look into Swift and Kotlin, but I don’t think it should be a problem.

Of course you can merge the two box-shadows together with a comma between them.

If you want a handy generator, one creative web developer made one at https://neumorphism.io

However the background shapes are one thing. This new style also comes with more “graphic intense” buttons and switches. In many cases we simply need to go back to “good old days” and use bitmaps. That seems like a regression but fret not — it’s not necessary. You can easily combine modern, fully code’able buttons with those card shapes with great results.

We also made this exercise (soon to be posted) while seeing what simple effects can achieve. And while it’s quirky and “retro” looking it was a lot of fun to make buttons that look like buttons ;)

Do we really need all that?

While this new trend has surely inspired a lot of designers, it’s problems are not that great compared to the accessibility issues with previously used card components.

So go wild! Play around with this trend and tweak it to make it yours. The UI designer’s job is moving rectangles around, so every time the rectangles turn out a bit “different” and “new” it’s bringing a bit of that joy back. Without that constant exploration all products will start to look the same again.

But also keep in mind that each new trend comes with caveats and has to be carefully designed to be usable.

Almost two years have passed since the original Neumorphism article appeared, and I wanted to quickly reflect on how this style has influenced design. Let's start with real-world use. I've heard of at least one financial institution actually using this style in their product - sadly pretty unsuccessfully. The design was actually quite accessible, but a little boring because it was too heavily focused on that one effect.

However, the effect did find its way into the mainstream a couple of times. The most notable is the Samsung Galaxy Unpacked logo which uses the neumorphic blocks in a very nice way.

The other notable use is by the super popular YouTuber Marques Brownlee a.k.a. MKBHD that you can see in his intro videos.

I predicted, that on its own Neumorphism has little chance to actually be successful, because it requires some extra fidelity to shine. That very first neumorphic shot by Alex was great not because of the extruded plastic look, but because of the mixed-in skeuomorphic switches and semi-realistic, colorful components.

For some reason many designers fixated on just those embossed/extruded elements when exploring this style. So while the exact way of doing neumorphism didn't prevail, it actually led to bringing a very uncool effect back to the design inspiration mainstream.

I'm talking of course about...

They were declared nearly useless a few years ago, with the only potential use being in some form field elements to make them look a little bit more 3D, but neumorphism and the chase of "plasticity" of design actually brought them back in a big, new way. We've been using this effect a lot lately, both in many of our own materials, clay mockups, and in some of the products we're building right now.

Of course if you use it too much, or add it to too many elements it will not look good. But for now it's a nice way to create something a little bit different than the boring, flat design that makes all the products look exactly the same.

Plus, it gives us another way to add depth, next to the standard drop shadows. You can also simulate depth with that inner-shadow extrusion quite well.

While Neumorphism didn't really become a trend of its own, it did influence a couple of very cool directions in UI design, especially in higher fidelity. Partial Skeuomorphism is also coming back through more 3d elements, more realistic objects added to otherwise minimal products, and more visual depth in the design.

This is exactly why exploring design trends is important! They all merge together, recycle and refresh what we can do with our designs to make them stand out. And with most typical "flows" already designed, UI is still (aside for the value of course) the biggest differentiator of digital products there is.

So let's be playful and create some cool stuff!